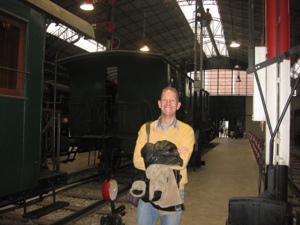 El Gamba de Legn’: ‘the wooden leg’ is an unusual name for a means of transport. It was the nickname that the people of Milan gave to the first steam-powered tram which started running on 9 September 1878, connecting Milan and Magenta over a distance of about 23 kilometres. But why wooden leg? Apparently the tram, running slowly along the tracks on Milan’s cobbled streets, made a syncopated sound, like a person walking with a wooden leg, and it rolled a bit as well.

The 17 trams had from 10 to 12 carriages, without doors or heating, and there were wooden benches for the passengers who got very cold in winter. But even so, in those days the Gamba de Legn’ was more efficient than the horse-drawn trams that could carry only a dozen people and that operated from Milan to Monza right up until 1900.

The 17 locomotives were manufactured by Lokomotivenfabrik Krauß in Munich, and they had a structure totally different from railway locos. For safety, the boiler and engine were completely enclosed by a steel screening structure, and the driver’s cabin was at the front for better visibility.

The maximum speed of the steam tram was specified by Milan’s provincial administration: 15 kilometres per hour in the countryside, along roads lined by mulberries used for silkworm raising, and 10 km/h in the city. When it was foggy, speed was reduced to 5 km/h. At every village and in Milan, an employee wrapped in a cloak and equipped with a lantern, bell and whistle waited for the tram and then walked in front of it to warn pedestrians of the oncoming danger. Before the First War, the tram ran five times a day. During the Second World War, many people were forced to live outside the city because of air-raid damage, and so all the goods trucks available were pressed into service, and even so, many passengers were forced to ride on the roofs of the normal carriages.

After the War, things returned to normal, and the last tram every day left Milan at 0.40 a.m., taking people back home after their evening out at the cinema or theatre.

The Gamba de Legn’ ran for about another decade after the war. Even though the residents of the villages and towns through which the slow and shuddering tram ran would have preferred to have kept the steam-powered version rather than the new electric trams, it finally went out of service in 1957. The last journey of the Gamba de Legn’ was acccompanied by huge crowds of people, who put flowers on the locomotive.

You can see this short, squat steam tram in the Padiglione Ferroviario at the Science Museum, Museo della Scienza e della Tecnica Leonardo da Vinci, along with some other much larger steam locos and one of the horse-drawn trams that the Gamba de Legn’ replaced. In this shed, the first thing that you notice when you go in is the smell, an unmistakable tang of iron, old coal residues, and ancient smoke. And while it’s terrifying to think of all those tons of trees and coal and coke that were burnt, it would be really nice, one day, to see El Gamba de Legn’ take to the streets of Milan one last time.

This site uses Akismet to reduce spam. Learn how your comment data is processed.