In addition to Milan’s most familiar landmarks, the Duomo, the Castle and Galleria Vittorio Emanuele, there are some other less familiar sights that are like clues helping you to fathom the city’s history and culture. Here are 10 of the less familiar, more unusual sights in Milan…

1. A ball that shouldn’t be there but is

The mid-1800s were hectic times for Milan, which at that time was part of the Austrian empire, and in March 1848 the tension between the population and the Austrian garrison exploded into street warfare. The battle lasted just five days, from 18 to 22 March, with the Milanese people inventing all sorts of systems for outwitting the occupants, such as building hot-air balloons to smuggle messages out of the city, enlisting the astronomers in their tower-top observatories to watch the Austrians’ movements, and building mobile barricades that could be rolled along the street. At Corso di Porta Romana 3 there is a remnant from this battle. Look up and you will see a cannonball stuck halfway into the wall, now labelled with a plaque with the date 20 March 1848. 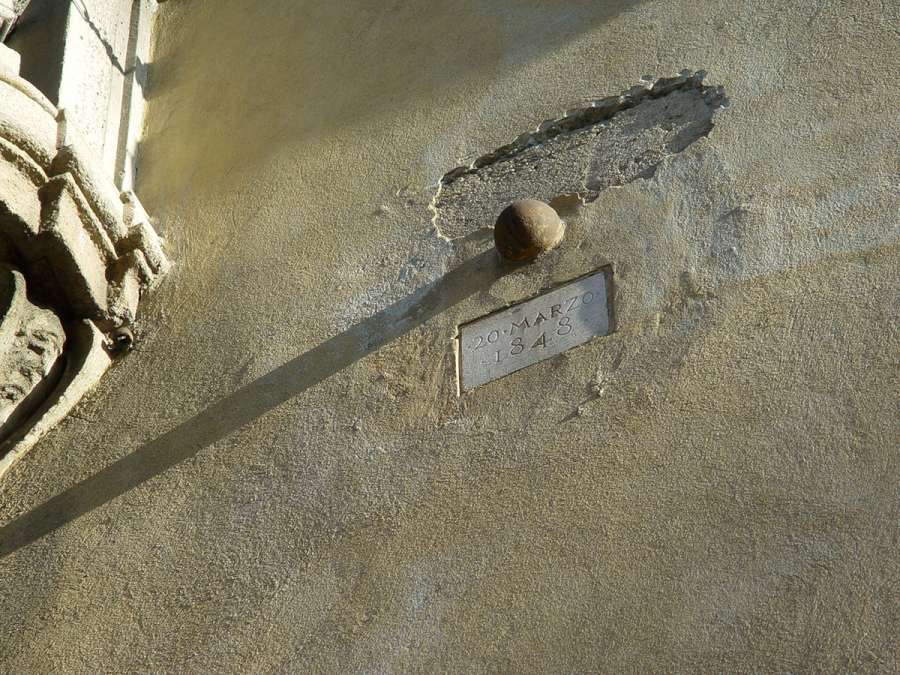 2. Balls that should be there but aren’t

Perhaps a more obvious one. The poor bull in the mosaic floor of Galleria Vittorio Emanuele whose privates are used by all and sundry in the hope of receiving good luck. Find the emblem of Turin under the central dome, place your right heel on the spot, and spin round once clockwise.
The mosaics under the glass dome also have another curious feature, the abbreviation F.E.R.T. that accompanies the emblem of the Savoy family from which the kings of Milan came. The family has distant origins, running at least back to the 10th century, so distant that there are no records of what F.E.R.T. actually means. All suggestions are mere conjectures, such as Frappez, Entrez, Rompez Tout (knock, enter, destroy everything).

3. The man who should be there but isn’t

The guy whose face is missing is Mussolini, shown in a mosaic in Milan’s Central Station, alongside platform 20. It was Mussolini and his regime that gave new impetus to the project for a new station that dated to before the First War, and it was inaugurated in 1931, complete with lots of decorations including this mosaic and various Fascist symbols. Many were removed, many still remain. Just look upwards while you’re walking around inside. 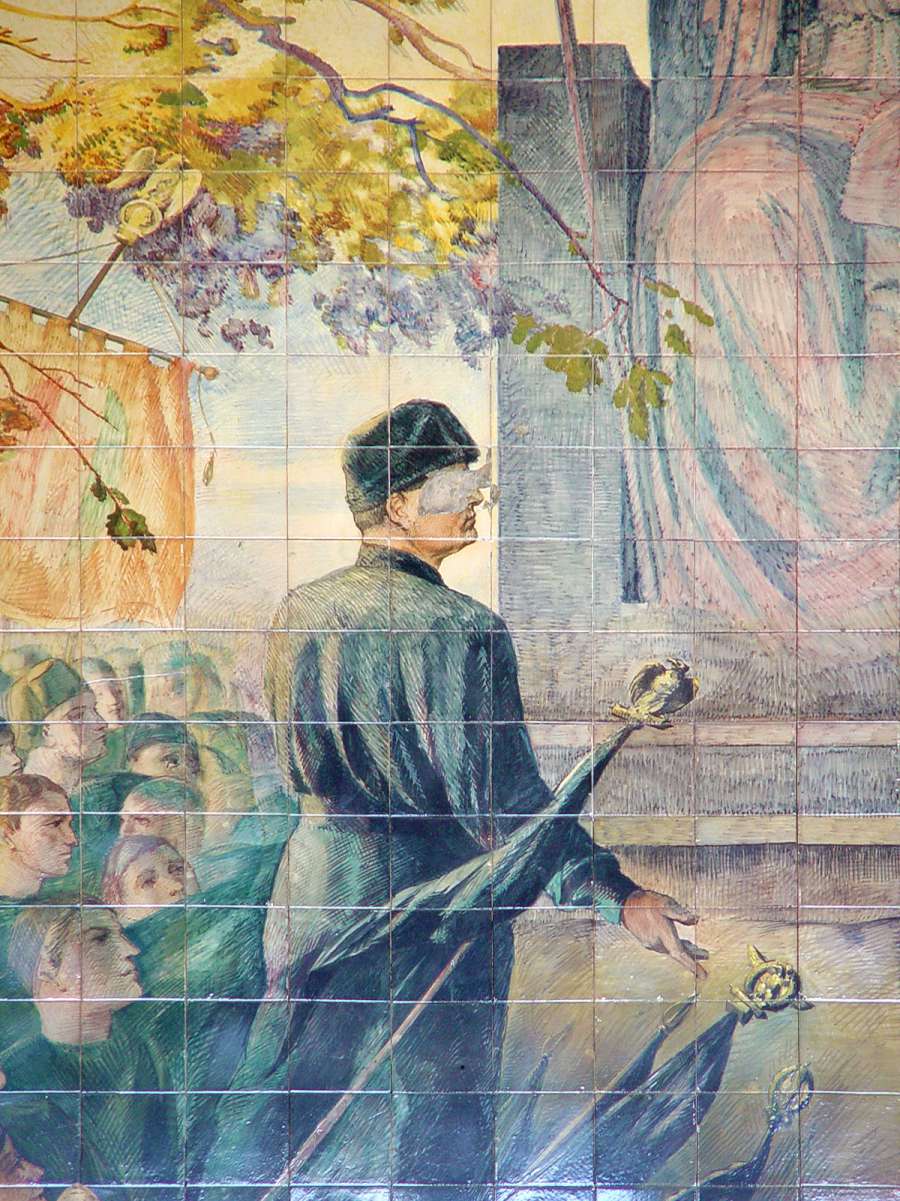 4. The man who shouldn’t be there but is

It’s Mussolini again, on one of the pinnacles of the Cathedral, in a double portrait with King Vittorio Emanuele II. Sculptors were working on statues for the Duomo from the late 1300s right through to the 20th century, and after 3,000 apostles, saints, martyrs, virgin, popes and bishops, they were running out of subjects. It is for this reason that Mussolini won immortality in the most prestigious location in the city. Other unexpected subjects include two boxers, Napoleon, and a host of cats, dogs and other animals. Climb to the rooftop, and when you emerge into the sunlight, turn left, look back northwest and downwards, and search for the double-headed pinnacle. 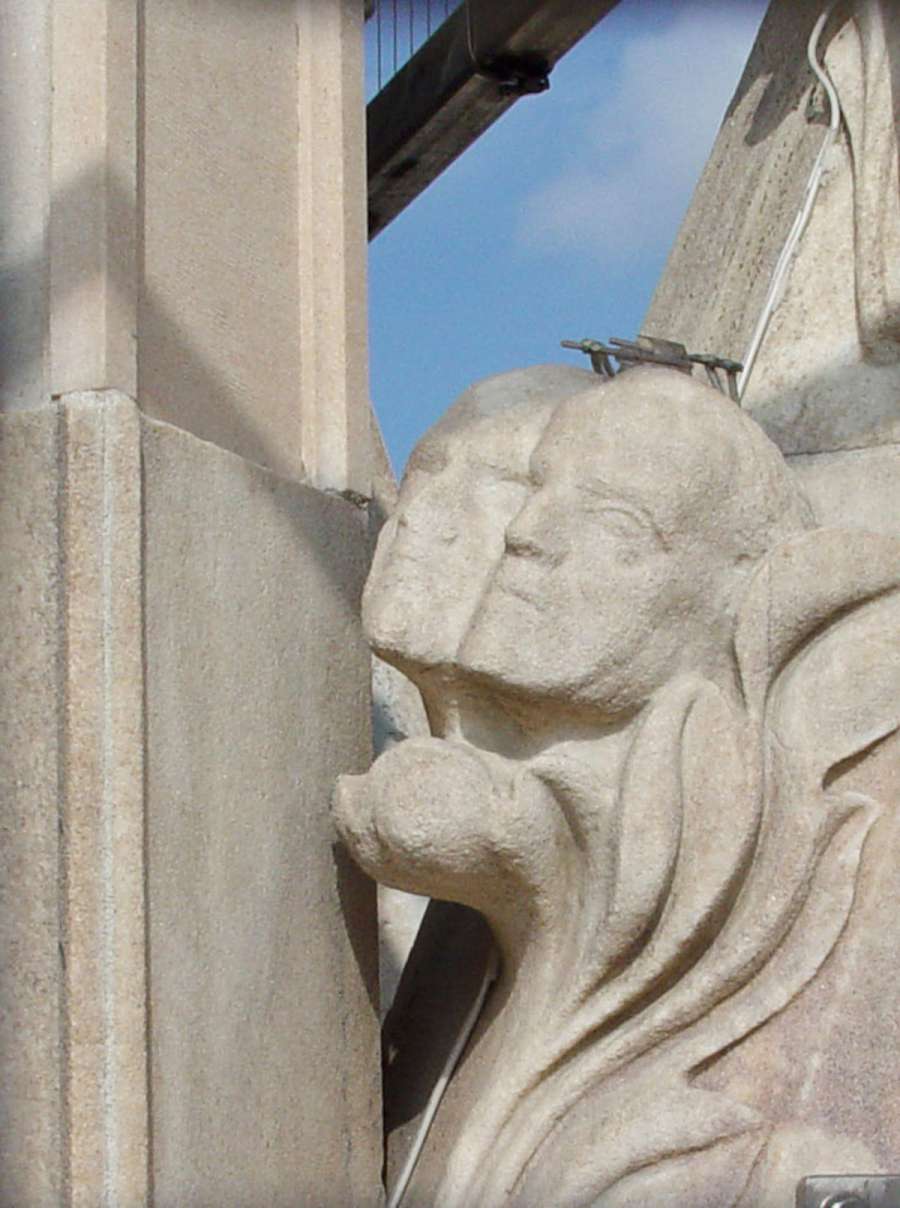 5. How to set your watch in the Cathedral

While you’re at the Duomo, take a look inside: as soon as you’ve entered the main door, turn right and look up to the vaults in the right-hand nave, and you’ll see a small hole. A ray of light from a hole in the south nave roof descends and reaches the floor, where there is a marble and brass line, with signs of the zodiac along it. It is a massive sundial, and the ray intercepts the line at astronomical noon. Nowadays, you can’t see it operating, with all the arc lights switched on inside, but for decades in the 19th century it was used for regulating the city’s mechanical clocks. 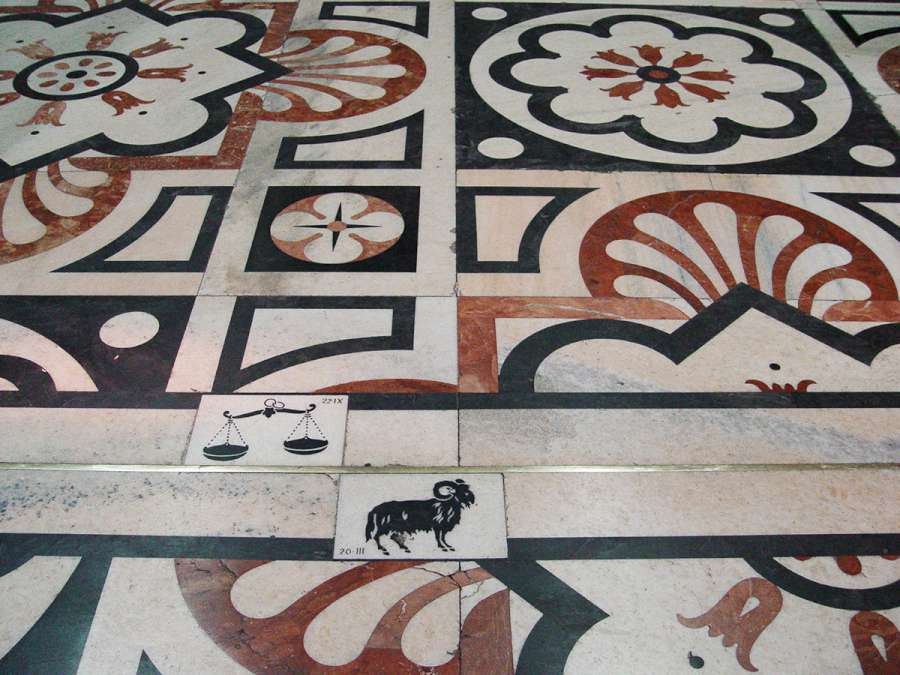 6. Lift up to cloud nine

The lift in the Duomo was built in the 1600s of wood and wicker and was decorated to resemble a cloud. It is still used twice a year, when the bishop of Milan gets in, is hoisted up 40 metres above the altar, and retrieves one of the Cathedral’s most precious possessions, a nail from the Crucifixion. Three days later, he goes up again to take it back. The tradition began because the pilgrims’ devotion for the nail, placed in its lofty position, seemed to be diminishing just because it was so high up, and so in 1576 the archbishop of Milan brought it down for the first time. Aspiring applicants to the position of archbishop are advised to write ‘good head for heights’ in their CV. 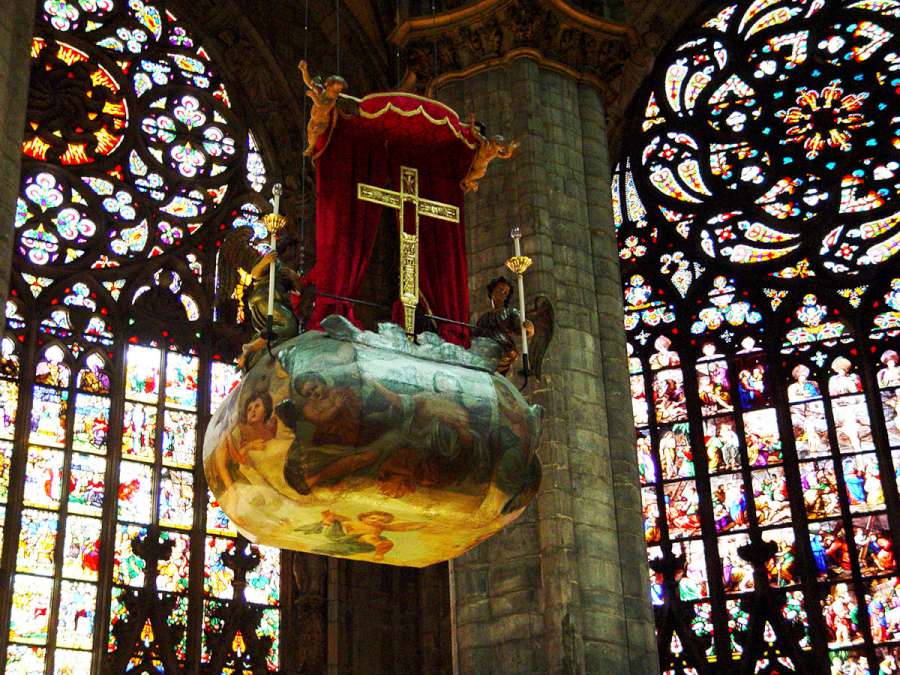 You thought virtual reality was a 21st century discovery? Take a look at the church of San Satiro, hidden away on Via Torino (about 80 metres down from Piazza Duomo, just after Via Speronari) where you’ll discover a Renaissance optical illusion that creates a virtual space nine metres long in a space of just 95 cm. It was designed by architect Donato Bramante in about 1480, and it solved several problems all at once: there wasn’t enough room to build a real apse because a road ran behind, Bramante wanted to build a central plan church with the altar at the centre of four identical transepts, and the clerics wanted the altar in the usual position on the east side. Talk about necessity being the mother of invention… 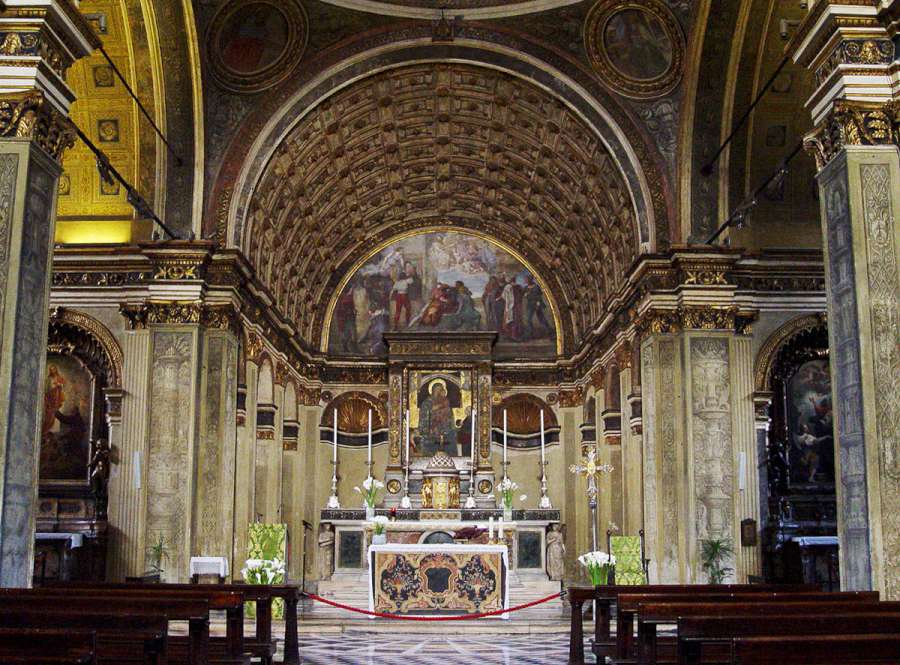 Bones, thousands of them, cloak the walls of a small chapel in the church of San Bernardino alle Ossa, in Piazza Santo Stefano. When the tower of the adjacent church of Santo Stefano collapsed in 1642, they immediately started to dig deeper foundations for the new tower and uncovered lots of bones. You reach the chapel through a narrow corridor on the right after going in, and you’ll see the skulls and long bones incorporated into the Rococo decorations. According to tradition, the bones are of saints and martyrs; it’s more likely that they are just ordinary people who died in the hospital that was nearby in the Middle Ages. 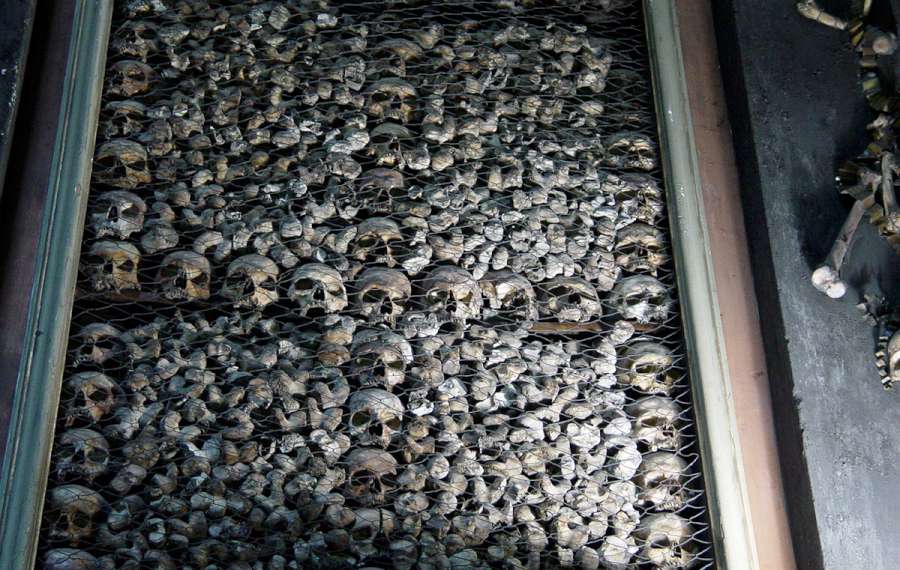 In Piazza della Repubblica, you can still see signs of the three air-raids in August 1943 that helped persuade Italy to sign an armistice with the Allies. The shrapnel from the bombs punched holes through the lamp-post, which has remained in position ever since. Probably the least fêted war memorial in the world. 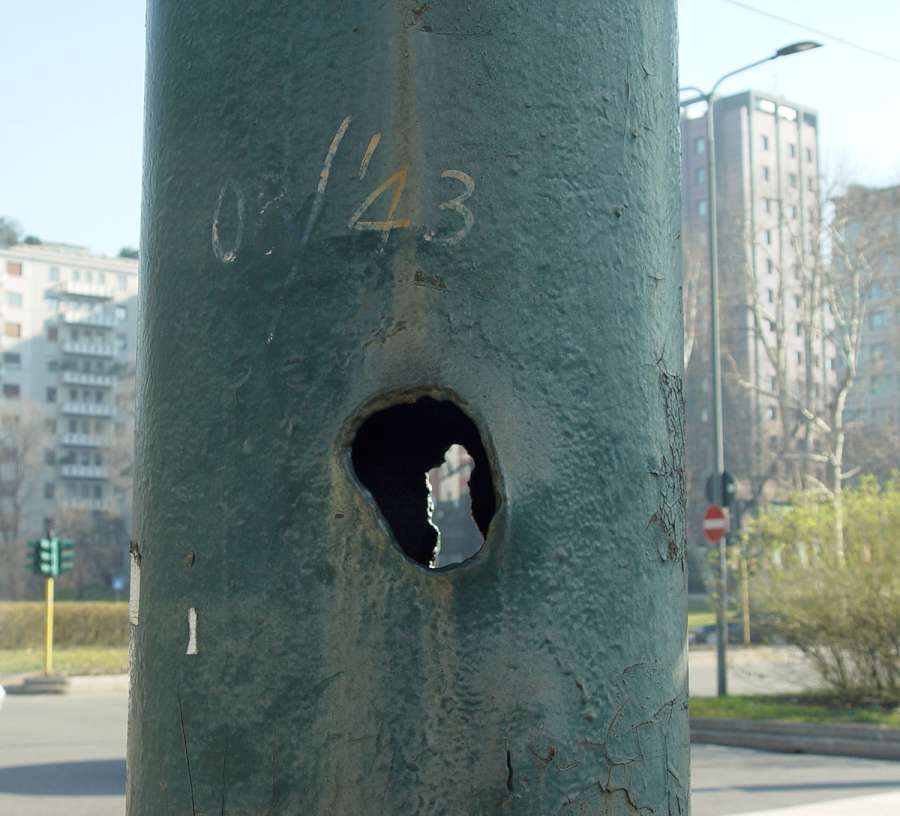 10. When walls have ears

This sculpture is on a building in Via Serbelloni 10, named ‘Ca’ de l’oreggia’ (‘Ear House’ in Milanese dialect), right next to the front door. Made in bronze and complete with some tufts of curly hair above, it was installed in the mid-1920s as a housephone, and a pipe led from the ear to the porter’s office. When it was working visitors actually had to announce themselves into this giant ear, about 70 cm high. Even though the housephone is no longer in use, it has been retained in its position on the façade, in part because it was created by celebrated sculptor Adolfo Wildt. 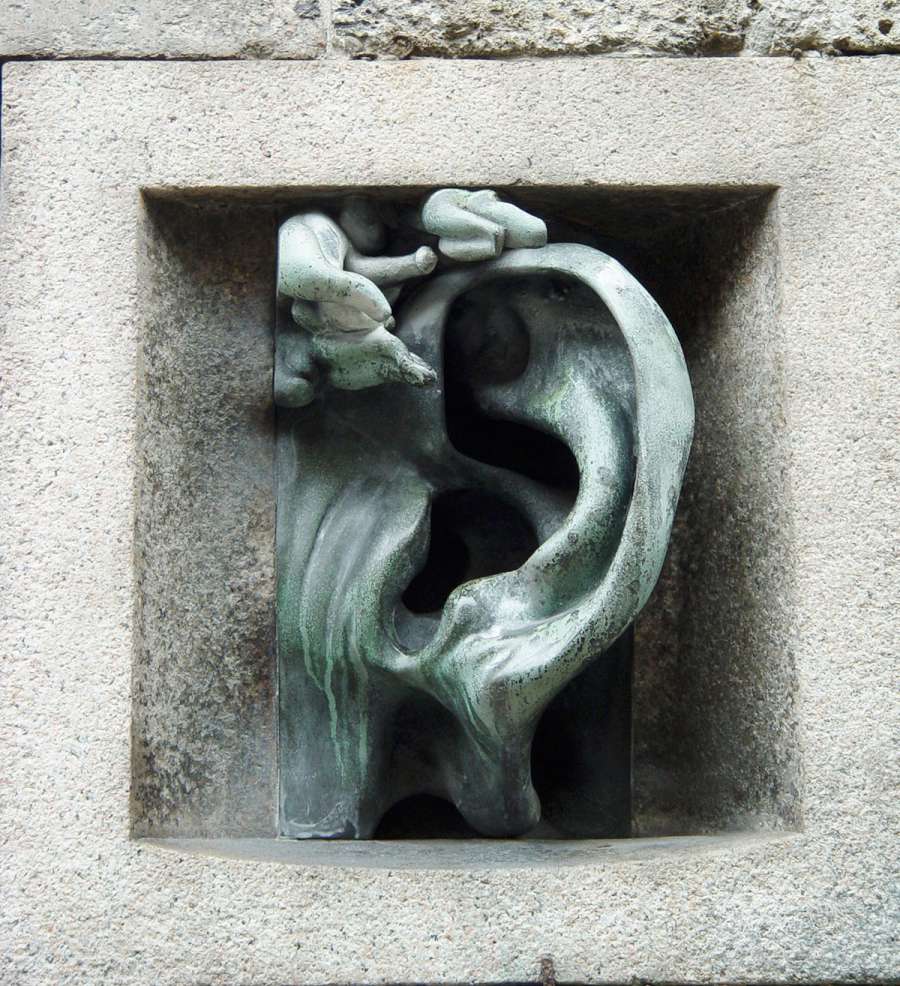