Gene’s Lunar Rover has been parked on the moon for 42 years without any particular administrative problems, but Milan is a whole different kettle of fish. On 28 October 2014, Cernan was driving the electrically-powered Lunar Rover – the one that he had driven for 35 km on the moon in 1972 – in Via Montenapoleone, Milan, when a traffic policeman pushed through the crowds, block of tickets and pencil ready, and wrote a parking ticket. But it was all fine, because the traffic policemen were there to provide security for Cernan and the vehicle, present for the inauguration of the new Omega boutique at number 16 of the famous shopping street. Cernan parked adroitly and neatly (not in “Milanese style” on the pavement), disembarked, and held up his left wrist. “This is the watch that went to the moon.” 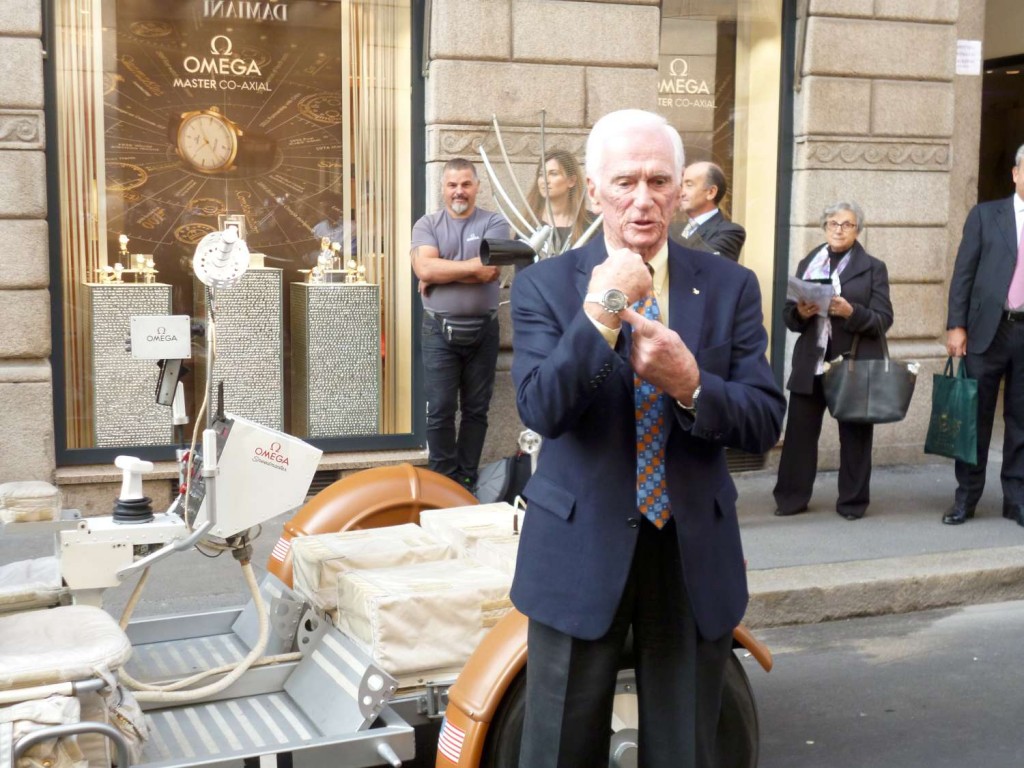 His watch is of course an Omega Speedmaster. He said, ““The Speedmaster is the only thing we took the Moon that had no modification whatsoever – it was right off the shelf. What’s interesting about my first one is that it’s beat up, it’s never been cleaned, it’s never been repaired and to this day I can take that watch and wind it and it keeps time as well as the day I got it. And I’ve walked in space with it for two and a half hours and worn it on the Moon for over three days.”

Gene Cernan was the last human to set foot on the moon. He spent three days on the lunar surface, and when, on 14 December 1972, he climbed the ladder back into the Lunar Module, it was a poignant moment for him and for the story of man in space. As far back as 1970, NASA and President Nixon had decided to cut short the Apollo series, for which missions were planned up to number 20, in order to concentrate on the Space Shuttle and other programmes. While Apollo 17 was returning to Earth, Nixon said in a statement, “This may be the last time in this century that men will walk on the Moon.” 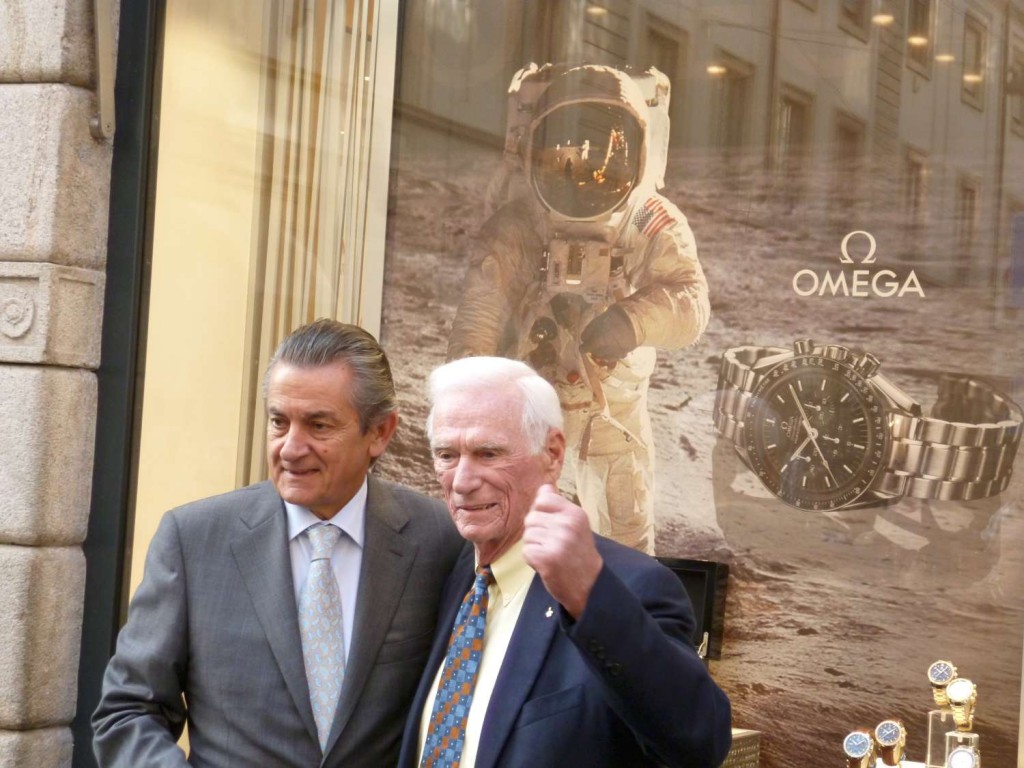 For Omega, the mission to a boutique in Via Montenapoleone was also a lengthy and complex task. The brand needed a larger space, and found it at number 16, when the Lorenzi family, who for decades had run a store selling knives and shaving accessories, decided to sell to Swatch Group. The boutique is a bright and pleasant space, with curving display units in light-coloured wood and plate glass. All around, the vast Omega heritage, not just watches, but jewellery, James Bond, George Clooney, and the conquest of space.

Celebrations continued in the evening, when Milan’s Science Museum (Museo della Scienza e della Tecnologia) inaugurated their new section dedicated to space. The interactive exhibition includes some original objects, including space suits and gloves, and a fragment of space rock. Eugene Cernan was accompanied on the moon by geologist Harrison Schmitt, the only scientist in the Apollo programme, but this piece of Taurus Littrow Valley was collected by Gene Cernan. In 1973, President Nixon gave it to the Italian government, which in turn gave it to the Science Museum in Milan.

I had the opportunity to speak both to Stephen Urquhart, President of Omega, and Gene Cernan. I couldn’t resist asking Mr. Urquhart about Omega and its privileged position as the only watch officially chosen by NASA to accompany manned space missions. “The watch was chosen as a backup, and it was only towards the end of preparations for the Apollo missions that the people at NASA realized that they needed a watch of this type. In Apollo 13 the watch played a pivotal role in timing the engine activation necessary to get them back on course. They used it to perfection, it wasn’t an easy thing to do under that stress.”
Omega’s close connection to the exploration of space is an important marketing tool, and today this is accompanied by other modern techniques such as product placement. I asked Mr. Urquhart about the significance of films such as Casino Royale and Skyfall.

“You mention the names of the films, I mention the name of the character, Mr. Bond. James Bond, even when the films are not that great, has an aura about him. It’s striking that even though the films are set in the present, the actual story dates back to the same era as the race to the moon, in the 1960s. If you buy a watch today, you are looking for sophistication, efficiency, pleasure, and James Bond is the same thing. James Bond is a story and a dream, and mechanical watches are also a dream and this is why they are coming back so strongly. They have that emotion.”

Gene Cernan is an Omega ambassador, and he could also be described as a motivational speaker, such is his enthusiasm. His message to young people is: “The dreamers of today are the doers of tomorrow, they will make the impossible possible. It happened in my life. I lived on the moon for three days.” He described how his initial dream, as a youngster born in 1934, was simply to fly planes off an aircraft carrier, and how one day he received an unexpected call saying that the navy was interested in recommending him to NASA for the space programme, and would he like to volunteer? “If I would have ever told people that I would have thought that ten years after I graduated, I would be walking in space around the world, they would have put me in an asylum. So I’ve always said, nothing is impossible.”

Gene described his relationship with his Omega watches. “This is the watch I flew in space with three times. I wore two watches, one for timing, and the other one I set for the time in Houston, Texas. I would look at the earth, and I would think, ‘the sun is rising on Texas. My daughter has gotten up, eaten her breakfast, she’s catching the school bus.’ Then I would look at the watch later, and it would be 7, 8 or 9 o’clock in Texas, and I would say, ‘hey, my daughter is eating dinner, done her homework, saying her prayers and going to bed.’ That watch was my security, like Linus’ blanket. It was a window through which I could see into my real world.”

At the press conference for the presentation of the new Space and Astronomy section of the Science Museum in Milan, sponsored by Omega, journalist and curator Gianni Caprara asked Gene whether he thought the next destination, Mars, was a real possibility, and whether he would go. To resounding applause, Gene Cernan replied, in his characteristic Texan drawl, “I’d leave for Mars tomorrow morning!”

This article was first published on luxos.com, click here to read it there