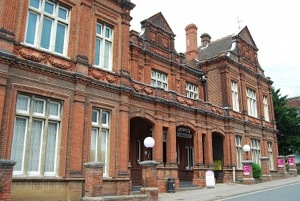 This is the true story of how I applied for a place at an Italian academy of fine arts, quite a long time ago: 1980, when I was 19. Things have changed a lot in Italy since then – well, a bit – but it is an example of the way in which a certain piece of office equipment is considered an essential part of bureaucratic procedures in that country.

I had been travelling around Europe in search of an academy that I liked, and having visited the one in Perugia, I asked the secretary if I could apply there and then. No, she replied, all applications from foreigners had to go through the Italian Embassy in the respective country. So I journeyed back to the UK (I was hitch-hiking: in those days it was still a feasible means of transport) and went to the Embassy in London, with all the school certificates that they had told me were needed. There were two people in the office, a dapper man with a perfectly-trimmed beard and an immaculate suit, and a slim woman called Elisabetta with dark hair who chain-smoked an Italian cigarette brand called Merit. She looked through all my documents and looked up at me with a frown.
“Non va bene. There is something missing. Un certificato di buona condotta.” I looked puzzled.
“Mario, come si chiama in inglese?”
“Certificate of good conduct,” said Mario.
“I don’t think we have that here,” I said.
“We need it for your application,” said Elisabetta.
“But how can I give you a certificate of good conduct if it doesn’t exist here?” I said.
“You can do it like this,” said Mario, “go to your parish priest, ask him to write a letter on his official letterhead, in which he declares that you are a good person and haven’t been engaged in criminal activities or arson or anything like that, and ask him to sign it. That should be enough.”

So I went back to my home in the heart of the Suffolk countryside, and next day visited Reverend Rodney Owens (who had also been my school teacher when I was much younger) and asked him to write the letter.
“Mmm, I don’t have any printed letter paper…”
“Don’t worry, just put your name and address at the top, that should be enough.”
The vicar took out a white sheet of paper and a pen.
“Er, Mr. Owens, do you mind typing it? You know, it’s for the Embassy, it has to look official.” So Mr. Owens took out his Remington and obligingly typed out the letter, signing it at the bottom.

The next day I went back to London with the missing document and showed it to Elisabetta. She read it, frowning, and turned it over, and then over again.
“Non va bene. There is something missing.”
“Oh no. What did he forget? The vicar, I mean.”
“There is no rubber stamp. Near the signature, there has to be the official stamp of the parish. Without it, the authorities won’t accept it.”
I had no choice but to take back the home-made certificate and travel back to Suffolk. The next day, I went to the vicarage.
“A rubber stamp? No, we’ve never had one. Whatever would we need one for?”
We were silent for a moment, wondering what we could do. Perhaps I could forge the imprint of a rubber stamp, like the prisoners-of-war in Colditz? But that, I thought, wouldn’t be good conduct, and so the certificate would be a contradiction, and it wouldn’t really be fair on Mr. Owens who had already signed it.
“I know what you can do,” said Mr. Owens, “go to the Town Hall in Ipswich and ask them to put their stamp on it, I’m sure they won’t mind.”

So I thanked the reverend and caught the bus to Ipswich and walked to the Town Hall. I enquired at the entrance and was asked to go to an office upstairs, where I explained the problem to a few clerks.
“That would be no problem at all,” said one, “except for one thing. We got rid of all our rubber stamps last year, because all our procedures have been changed, what with all the new computers.”
I must have looked very disappointed.
“Hey Bill,” he said, “do you know where they took all that stuff? Or did they just chuck it away?”
“Ooh no,” said Bill, “they would never do that. Hang on, I’ll ask Jack, he’ll know.” He picked up a phone and dialled a number. He had a brief conversation with Jack and put the phone down.
“Problem solved. They took it all to the museum. Do you know the Ipswich Museum, on the High Street?” I nodded, it was just down the hill from my old school. “If you’re quick, you’ll get there before it closes.”

I thanked them, ran downstairs, ran up Lloyd Street, turned left into Tower Ramparts, on up High Street, and into the Museum, a brick building. I saw a man on duty near the door, and explained my story, starting from the Accademia di Belle Arti di Perugia, moving on to the Italian Embassy, and then to the Reverend Rodney Owens. “And so,” I said, “it would be great if you could find one of the rubber stamps that came from the Town Hall and stamp this letter from the vicar.”
The man stood with his arms folded, a serious expression on his face.
“Young man, do you really think that we can open one of our display cabinets and use one of our precious exhibits just to put a stamp on your piece of paper?”
My hopes once again changed to disappointment, but only for a moment. His face changed to a grin.
“Go on, I’m only kiddin’, course we’ll let you use the rubber stamp, heaven knows how many documents they’ve stamped, if they do one more, there’s no damage done. And they’re not exhibits, at least not yet, anyway. Hey, George, keep an eye open here for a bit, will you? I’ve got to go and find an exhibit from the future.” He led the way through the main hall, where much of the space was taken up by an enormous dinosaur skeleton. The cases against the wall contained a selection of fossils. “Rubber stamps, soon they’ll be extinct just like these ammonites and the brontosaurus.” I felt like saying that I wasn’t so sure of that, but stayed silent. At the far end of the hall, he took a cardboard box from a cupboard, opened it, and began to rummage through the rubber stamps inside, some with turned wooden handles, some flat. “Hmm, not this one… not this… ah, here we are. Ipswich Borough Council, complete with emblem. Oh, that’s lucky, there’s an inkpad as well. Shall I do the doings? Where’s the piece of paper?”
I took out the letter and gave it to him. He placed it on a table, opened the inkpad, pressed the rubber stamp onto it, raised his hand high, and then paused. I waited, wondering why he had stopped.
“I suppose I’d better test it first. Just to see whether there’s enough ink.” He looked around for another piece of paper, and found a leaflet for last year’s Suffolk Show. He stamped it and examined the result.
“D’you think that’ll do?”
“That’s fine, thank you,” I said, and he inked the stamp again, applying it vigorously to Rodney Owen’s letter with a thud.
“Thank you,” I said again, putting the letter away, greatly relieved, even though I was unsure whether my home-made certificate would satisfy Elisabetta and Mario at the Italian Embassy. I left the museum wondering whether the stamp had to be a certain shape or size in Italy, or a special colour. Mine was a very dark blue, perhaps they wanted it black?

The next day, I was back at the Embassy, waiting anxiously while Elisabetta examined the Certificate of Good Conduct written by the undersigned Reverend Rodney Owens and bearing the official seal of Ipswich Borough Council.
“Mario, pensi che vada bene così per il Console?” She took the certificate over to Mario, who put down his paper, glanced at it, took a second quick look at the stamp near the signature, and nodded.
“Sì, va bene.”
Elisabetta said, “Yes, it is fine. Welcome to Italy!”